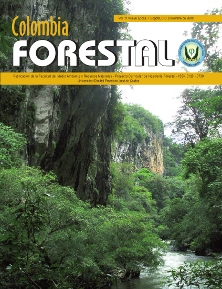 Growth Of Transplanted Timber Species Seedlings In The South Of The Colombian Amazon: A Preliminary Study

Finegan, B. 1996. Patterns and processes in neotropical secondary rainforest: the first 100 years old succession. Trends in Ecology and Evolution 11: 119-124

Whitmore, T. C. 1996. A review of some of the aspects of tropical rainforest seedling ecology with suggestions for further inquiry. Pgs. 3 in: M.D.Swaine (eds.). The ecology of tropical forest tree seedlings. Parthenon, Comforth and UNESCO. Paris, France

(1)
Gruezmacher, M.; Duivenvoorden, J. F. Growth Of Transplanted Timber Species Seedlings In The South Of The Colombian Amazon: A Preliminary Study. Colomb. for. 2008, 11, 35-44.

GROWTH OF TRANSPLANTED TIMBER SPECIES SEEDLINGS IN THE SOUTH OF THE COLOMBIAN AMAZON: A PRELIMINARY STUDY

Two commonly used timber species in the area of Amacayacu National Park (Quararibea sp. and Minquartia guianensis) were selected to develop an experiment that compared the early performance of seedlings in mature and old secondary forest. We transplanted seedlings of these species into mature and secondary forest plots and observed height and diameter increments as well as mortality for a period of approximately 70 days. In situ seedling performance under parent trees in mature forests was measured as a control. The structure of both experimentalforestswasnotapparentlydifferent.We found similar seedling performance for both species in the two forests. However, the seedlings hardly showed any relative height or relative diameter increment in the short period of measurements. The results show that enriching secondary forests by means of transplanting seedlings from timber species might be a promising way of ecological restoration.

In the Amazon region, rapid population expansion and increasing transformation of mature (primary) forests into agricultural fields, has caused the area of secondary forest around settlements to increase, driving local people to shorten the fallow period, as has been documented for regions in Peru by Coomes et al. (2000). Shorter fallow periods will eventually degrade the productivity of these secondary forests because they have no time to replenish, leading to what has been described as the fallow or barbecho crisis (Smith et al. 2003).

A useful alternative for people of this region is ecological restoration through forest enrichment with timber species. This practice might accelerate natural regeneration and allow to maintain sustain-ability and diversity of disturbed forests (Meffe et al. 1997, Chinea 2002, Koslowski 2002). It might contribute to the persistence of secondary forests by recuperating site productivity (Smith et al. 2003) and generating a sustainable alternative for the local people. Secondary forests can provide economical and ecological services that will relieve pressure on mature forests and fulfill the living demands of local inhabitants (Smith et al 1999, Metzger 2002, Smith et al. 2003). However, the effects of land use history may still be present in old secondary forests (Finegan 1996, Gomez-Pompa & Burley 1991, Guariguata & Ostertag 2001) thus interfering with seedling performance (Benitez-Malvido et al. 2005). The principal aim of the study here presented was to examine how transplanted seedlings of two shade-tolerant canopy species used for timber in Colombian Amazonia were able to survive and grow in secondary forests.

The study area was located in the Amacayacu National Park’s southern district (3º 50’-3º 02’S and 69º 54’-70º 20’W), the most accessible area of the park (Figure 1). The mean annual temperature in this area is around 26ºC and relative humidity is near 90% (Arbeláez et al. 2008). Rainfall patterns are unimodal, showing a rainy season between October and June when average monthly precipitation levels fluctuate around 350 mm and 500 mm. According to the system of Köppen, the climate in the area classifies as Afi (tropical, all months with rainfall above 60 mm). The physiography is dominated by medium size hills, found at elevations below 200 m above sea level. Geologically, the area is built up by Tertiary and Plio-Pleistocene sediments, and Quaternary alluvial deposits (Proradam 1979). 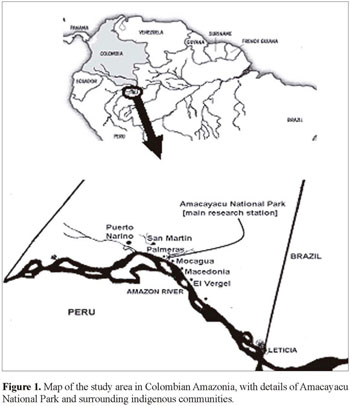 We selected two of the mostly used timber species of terra firme forests in the Amacayacu area (Quararibea sp. -local name Castaño -and Minquartia guianensis -local name Acapú) to design the seedling transplantation experiment. Quararibea sp. seedlings were defined as individuals between 10 and 70 cm. They showed abundant foliage and most of them were still attached to the seed at the time of transplanting. Minquartia guianensis seedlings were defined as individuals between 10 and 20 cm high. Seldom had these seedlings more than four leaves, and the seed had gone completely at the time of transplanting. Seedlings from both species were found abundantly and occurred widespread during the study period.

All seedlings were collected in mature forests. We assumed that they represented offspring from the previous fruiting season. Transplantations were made into eight 12 x 12 m plots which were established in the centre of four secondary and four mature forest sites. The secondary forests represented areas of past agriculture which had stopped about 30 to 50 years ago. According to local informants the mature forests had never been cut down. All plots were located in a total area of approximately 8 km2, within a distance of 10 km from the village settlements (Figure 1).

We transplanted a total of 552 seedlings, 274 in secondary forests and 278 in mature forests. Seedlings were transported with a bulk of soil from the original site to prevent damage to the root system. This soil was largely removed just before planting, carefully avoiding unneeded damage to the roots. In each plot between 30 to 40 seedlings of both Quararibea sp. and Minquartia guianensis were systematically planted into a grid of 1 x 1 m, at a depth of approximately 20 cm.

Each seedling was monitored on a 10-day interval basis for a period of 70 days (between December 9 2004 and March 11 2005). Seedling height was measured to its apex with a metric tape. Its diameter was measured to the nearest 0.01 mm at ground level, using plastic callipers. Seedlings that had disappeared were considered to have died.

In order to characterise the abiotic properties of both forest types (mature and secondary), soil was sampled in all experimental plots by taking away the litter layer and using a garden spade to collect the uppermost 20 cm of mineral soil. Samples were stored in a dry place and later analyzed according to the standard procedures carried out at the soil laboratory of the Geographical Institute ‘Agustín Codazzi’. These analyses comprised granulometry with a Boyoucous hydrometer, after dispersion with Na2P2O7; pH (H2O) in a volumetric 1:1 soil:water solution; percentage of organic C, according to the Walkley-Black method; exchangeable bases (cmol(+) mg soil) after extraction with 1 N NH4OAc (pH = 7) with Ca and Mg complexed with EDTA, and Na and K measured by flame photometry; and available P (mg per kg) by extraction with 0.1 N HCl and 0.13 N NH4F, according to BrayII (IGAC 1990). Forest overstory density was estimated at the four corners of each experimental plot through the use of a Model-C Spherical Densiometer. Also, the height and diameter of all trees with DBH >10 cm (DBH=Diameter at 130 cm height) in the plots was recorded.

Seedling performance was based on mortality (number of dead individuals at the end of the sampling period) and growth of surviving individuals. Estimates of growth were done by relative height increase (RHI) and relative diameter increase (RDI) in the following way:

in which t6 is the last recorded measurement and t0 the first.

Differences between forest type regarding soil analyses and mortality rates were tested with non-parametric tests (Kruskal-Wallis). The effects of forest types on seedling growth was tested by Nested Analysis of Variance (Zar 1996), in which plots were nested within forests. Kolmogorov-Smirnov tests with Lilliefors significance correction were carried out to examine the normality of the residuals of the ANOVA. If needed, response variables were log-transformed (after being shifted into positive values) to reduce skewness. However, despite these transformations, residuals in all ANOVA remained not-normal. Differences in growth between transplanted and in situ seedlings were compared with Mann-Whitney tests. Analyses were carried out using SPSS (version 11.0).

The average canopy openness or density was 93% in the mature forests and 94% in the secondary forests. Mature forest showed a slightly larger diameter for trees of the same height than secondary forests (Figure 2; difference in regression coefficients was not tested). Soil analyses hardly differed between the forest types (P>0.05, Kruskal-Wallis tests for pH, Ca, Mg, K, Na, P, and organic matter; Table 1). 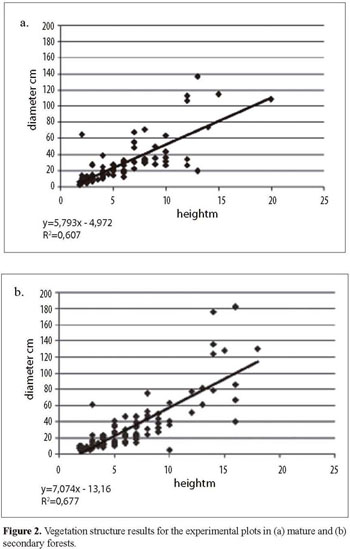 Regarding total numbers, seedlings of both Quararibea sp. and Minquartia guianensis survived relatively well under mature forest conditions (Table 2). On a plot basis, the mortality of Quararibea sp. seedlings was marginally higher in secondary forests (Kruskal-Wallis test, P=0.06), but that of Minquartia guianensis was not different between the mature and secondary forests (Kruskal-Wallis test, P=0.47).

On average, the growth estimates for both species did not show any trend during the sampling period. For example, the average height of Minquartia guianensis in the four secondary forest plots fluctuated around 12 cm at all measurement events (Figure 3). Seedling heights in mature forests, and seedling diameter in both forest types showed a similar lack of trend (figures not shown). The main result of this preliminary study was that timber species seedlings transplanted in old secondary forests did not perform worse regarding mortality and initial growth than seedlings transplanted in mature forests. This suggests that enriching secondary forests with timber species may have some potential for local restoration. However, caution is needed to interpret the value of this result.

The measurement period was extremely short. As a consequence, the sampling period may have been too short to record noticeable differences in growth of the two selected shade-tolerant canopy species, which are known to grow slowly in low light conditions (Clark & Clark 1999, Lewis & Tanner 2000, Welden et al. 1991). Studies on the growth of Minquartia in rainforests of Costa Rica have found stem diameter increments of less than 4 mm per year (Clark & Clark 1999). Monitoring growth and establishment of shade-tolerant canopy species also require measurement periods of several years to incorporate the impacts of climatic variations and forest dynamics (Clark & Clark 1999, Campana-Camargo et al. 2002, Benitez et al. 2005). In our study, transplanted seedlings from Quararibea sp. grew faster in diameter compared to the in situ seedlings, and those from Minquartia guianensis grew faster in height but slower in diameter. The short measurement period and the inherently poor estimate of seedling growth is probably responsible for this rather inconsistent behaviour of transplanted seedlings in comparison with the in situ seedlings. Likewise, the plot effects within forest may have this explanation.

Finally, there are some important methodological short-comings that influence the interpretations and conclusions of our preliminary study. The seedlings as well as the experimental plots were not selected at random. This affects the outcome of the experimental comparisons in a entirely unpredictable way. For example, the field selection of seedlings may have been done with an unintential bias for vigorous seedlings. It is quite likely that preferential collection of seedlings for enrichment trials represents an efficient way of obtaining adequate planting material. However, because it is unclear if and how criteria related to the conditions of the seedlings were applied in this study, testing of the experimental sampling results to allow generalizations have limited value and hamper the development of follow-up studies. Also, the measurement of the in situ seedlings was not synchronic with the recording period of the transplanted seedlings, leading to unwanted and poorly understood variation in seedling comparisons. Lastly, the experiment took place in a small area, which implies that the conclusions may not apply to other areas in Amazonia, where different conditions of climate, terrain, soils, and forests may prevail.

We gratefully acknowledge all help received from Tropenbos-Colombia, Amacayacu National Park, the UAESPNN, as well as the people in the communities around the park, especially those from Mocagua and Palmeras. We thank Angela Parrado, Carlos Rodriguez, and one anonymous reviewer for useful comments on the manuscript. Financial support was given by Tropenbos International Colombia Programme and the Universiteit van Amsterdam (IBED). This study was part of a thesis research in the masters in Tropical Ecology at the Universiteit van Amsterdam.

Finegan, B. 1996. Patterns and processes in neotropical secondary rainforest: the first 100 years old succession. Trends in Ecology and Evolution 11: 119-124.

Whitmore, T.C. 1996. A review of some of the aspects of tropical rainforest seedling ecology with suggestions for further inquiry Pgs. 3 in: M. D. Swaine (eds). The ecology of tropical forest tree seedlings. Parthenon, Comforth and UNESCO. Paris, France. 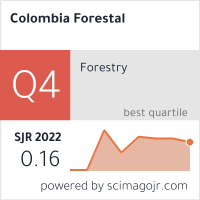