Design, making, modeling and control of a mine prototype for research in mining ventilation

Los datos de descargas todavía no están disponibles.
DESIGN, MAKING, MODELING AND CONTROL OF A MINE PROTOTYPE FOR RESEARCH IN MINING VENTILATION

DESIGN, MAKING, MODELING AND CONTROL OF A MINE PROTOTYPE FOR RESEARCH IN MINING VENTILATION

The main goal of a ventilation system is to supply mining activities with fresh and good-quality air. The major function of the ventilation control is to pump fresh air to the extraction shafts via tarpaulin tube to extract gases such as CH4, CO, SO2, H2S, NO2 and / or CO2. This operation depends on the type of extracted ore and also on the mining method applied. This paper describes the design, modeling and control of a mine prototype for studying mine ventilation. The prototype mine shown is designed to recreate a ventilation system that includes gas sensors that provide real-time measurements, also a control center where fan control can be carried out according to the percentages of detected gas, and precise knowledge about the actual energy consumption of fans.

One of the main challenges of Mining Engineers working in underground mining is to provide clean, fresh air for the extraction rooms in order to guarantee the safety of miners [1] [2]. To achieve this goal, an effective action of automatic control of the fans (responsible for maintaining the air extraction in the deepest rooms of the mine) should be performed. This action should consider the level of generated gas on every operating front. Proper mine ventilation is ensured with a good knowledge of the generation and propagation phenomenon of gases in shafts, cavities and enclosures, as shown in [3] [4]. Today, there are software tools such as VnetPc Pro, Ventsim Visual, which permit simulating and calculating this physical phenomenon. These tools also allow trying different ways to ventilate a mine. This type of software is suitable for studying ventilation problems under ideal conditions (homogeneous pressures and temperatures and laminar flows), and so far is complicated for some entrepreneurs of small and medium mining to acquire these tools because of their high cost [1] [2] [5] [6]. Due to strict regulations on the issue of mine safety, big mining companies have chosen to automate their ventilation systems [1] [2] [6]. An automated ventilation system consists of gas, temperature and pressure sensors installed at strategic points together with fans that may respond to control signals that may come from outside the mine. Additionally, such a system includes a control center and a communication system for transmission of information [7] [8]. The sensors produce local measurements, which can be carried outside the mine through twisted pair, optical fiber, coaxial cable, or by wireless media (e.g. Wi- Fi). The information is carried to the control center, where, depending on the measurements, one can regulate the air flow to be generated by controlling the speed of auxiliary fans [7] [9] [10]. This is achieved by changing fan speed using a variable speed drive connected to the fan. This cooling method has proven to be highly effective since it allows real time optimum control of the gases (e.g. oxygen level) that are generated at extraction rooms. In Colombia, mining has exhibited a significant growth due to the great potential of minerals of interest that exist in Colombia and are required by the world market. This has become evident in the increase in GDP (Gross domestic product) due to foreign investment in mining [1] [5] [11]. New mining projects generated in the country require technology and a deeper study of the problems [2] [6]. This situation can lead to cost overruns and delays in production in mines. Therefore, further investigation of this type of problems is ever more necessary, considering the conditions and needs of Colombian mining [5] [6]. In this context, academia must respond effectively to these challenges, searching for the best way to cooperate in solving such problems. One way to address these issues is through prototyping.

Mining engineers have been primarily concerned with proper design of ventilation tunnels, fans and turbines, and more generally with the short and long term planning of ventilation requirements [12] [13]. However, recent technological developments in the fields of embedded control and wireless sensing systems [1] [11] motivates some new research efforts intended to find global automation strategies that would allow the optimization of real-time control for ventilation systems [8] [9] [10]. For these reasons, it is important to investigate the ventilation process in real time using a prototype that allows effective control of ventilation by using the technological tools that exist today [9] [10] [11].

The prototype mine shown in this paper is designed to recreate a ventilation system that includes gas sensors that provide real-time measurements, also a control center where fan control can be carried out according to the percentages of detected gas, and precise knowledge about the actual energy consumption of fans.

The paper is organized as follows: First, the introduction and a survey are provided. Then, a description of the prototype is presented, obtaining the reaction curves and model identification by using recursive estimation methods of the prototype and real-time PID control. Finally, analysis of the results and conclusions are provided.

The prototype design was based on a paper called Air flow modeling in deep wells: applications to mining ventilation [10].

The prototype runs as follows: gas is injected into the mining faces by using a series of pipes connected to them. The gas is detected by the sensor, which sends a signal in the range of 0 and 5 volts, corresponding to a range of 300 to 10000 ppm in the sensors for CO2, and 200 to 10000 ppm in the sensors for CH4. The signal is transmitted to an acquisition data NIDAQ6211 card (National Instruments card), which allows sending data to the computer for processing and controlling (using MATLAB®-Simulink®). All fans can be controlled from the computer, providing flexibility to obtain the reaction curves. The prototype mine permits the following ventilation control practices:

The mine prototype designed is shown in Figure 1. 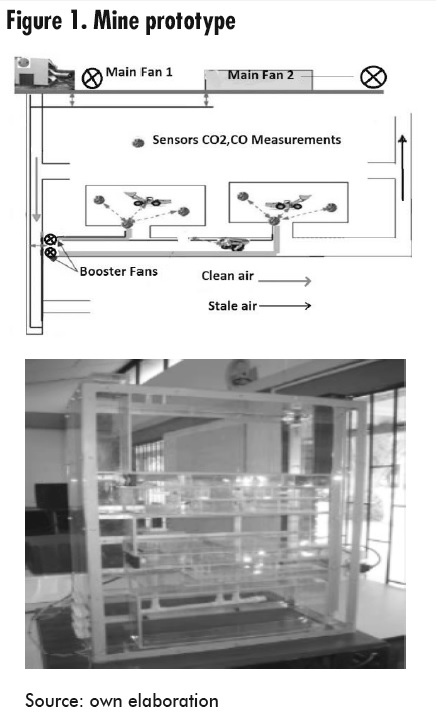 3. Modeling of the prototype

To obtain reaction curves of the prototype, the following procedure was followed 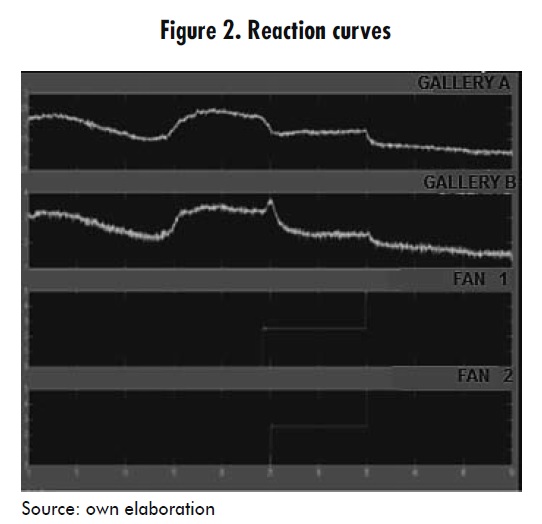 In Figure 2, the gas evacuation caused by the ventilators operation is observed. In this figure the fast gas evacuation of a gallery due to ventilator 1 produces an increase in the gas content in gallery B, which subsequently begins to empty. The task may be completed much faster if we activate the fans at their maximum value at the same time. The transfer functions obtained from the reaction curves measures were as follows:

To estimate the parameters of the process model, the least squares algorithm was implemented, with a restart of the covariance matrix using Matlab-Simulink®. The connection with the real prototype was performed with the data acquisition card from National Instruments® (National Instruments 6211). The scheme used is shown in Figure 3 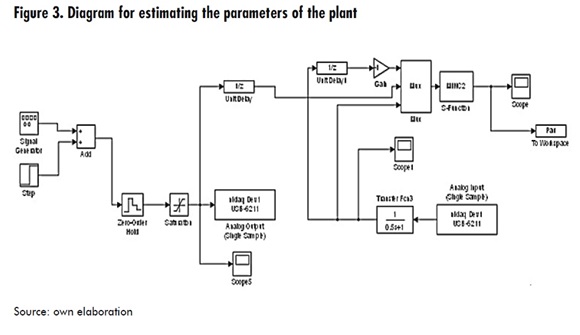 The least square algorithm was programmed by the authors using the Matlab S-function. The code of the program is optimized step by step to use minimal execution time for real time applications. The estimates are shown in figure 4. 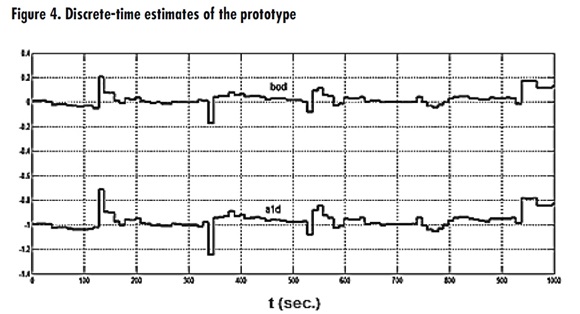 The signal applied to the fans was confirmed by a level of 2 volts DC with a white noise signal. This signal contributes to rapid convergence of the estimates on appropriate values, as described in [14]. The signal used is shown in Figure 5. 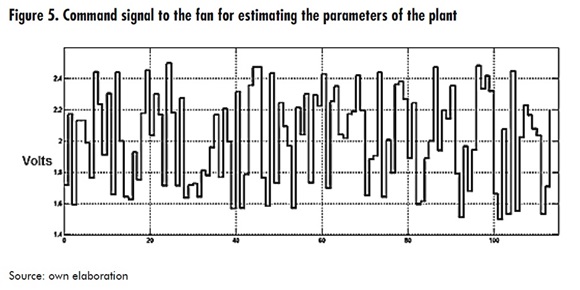 According to these estimates, the transfer function in the discrete time plant was generated using zero-order hold (ZOH) and sampling period Tm = 1 sec (for more information on the subject, see the text described in [15]).

4. Design of a PID controller

Perhaps the best known controller at the academic and industrial level is the PID controller. The reputation of this controller is attributed to its flexible structure and ease of implementation. The general equation of a PID is as follows:

For the design, we required only a PI controller (kd = 0). Function e (t) represents the error between the desired output (i.e. set point) and the actual process output.

The controller transfer function is the following:

To design the controller, the feedback scheme below is employed.

The transfer function of the closed loop system is given by:

To design the controller comparing the polynomial with the desired closed loop characteristic polynomial S2 + 2ρω0s + ω02 For the design a response setting time ts = 30 was selected with ρ = 0.7 and ω0 = 0,22rad/seg

From this comparison we obtained the parameters of the PI:

For the discrete time version of PID, the Tustin approximation was applied

The PID discrete time version is achieved as follows In the time domain, the controller equation rests:

Graphs of the gas concentration in galleries are shown in Figure 6. The voltage applied to fans 1 and 2 are illustrated in figures 7 and 8 respectively. 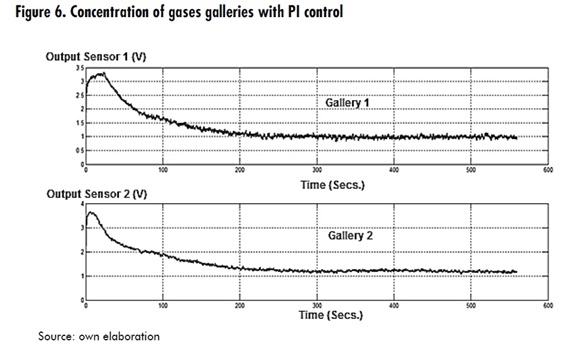 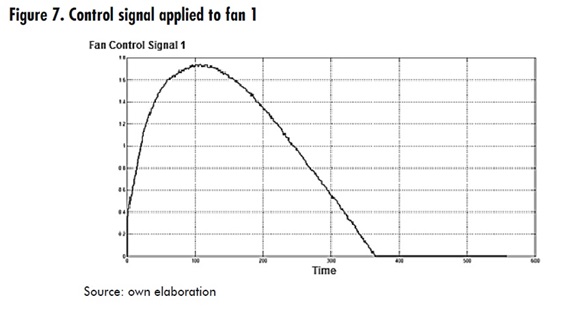 The prototype is able to measure different levels of gas depending on the airflow pushed by the fans, also permitting studying the dynamics of the gases in the mine prototype.

The method of response curves and the leastsquare estimation method to obtain reliable models allow designing the controllers.

The least-square estimation method supplies a fast convergence to an appropriate set of parameters of the prototype model in a short time, within the characteristic times of the plant.

The control system implemented in the prototype can regulate the air inlet flow to the galleries of the prototype. This control strategy allows quickly dilution of gases, and proper control actions on fan speeds whenever it is not necessary to increment the air inlet flow, so the consumption of energy can be reduced also. The time to evacuate gases with the fans running at half load is about 3 minutes.

The most effective way to evacuate gas from galleries is achieved by driving the two fans at the same speed. Whenever they operate with different values, the removal of gas from the galleries is not optimal.

To understand and control the phenomenon of ventilation, it is necessary to test real prototypes that can emulate the problem of air flow in ventilation as appropriate.

To effectively automate a system of mine ventilation, it is necessary to perform tests and simulations to determine the behavior and response of the process under different operating conditions.

An interaction between the airflows of the two galleries was observed in the reaction curves, which shows that a control strategy is required to evacuate gases effectively.

The evacuation of the gas into the galleries is more effective if one has electronic systems to control the fans using an online sensed gas concentration.