A .I. Maimistov,“Propagation of an ultimately short electromagnetic pulse in a nonlinear medium described by the fifthorder Duffing model”, Opt. Spectros, 94(2), 2003, pp.251-257

This work is aimed at finding, by means of the Jacobi elliptic functions, the exact periodic solution of the differential cubic Duffing equation with initial conditions that describe the behaviour of a nonlinear electrical circuit.

Let us consider a capacitor of two terminals as a dipole in which a functional relationship between the electric charge , the voltage and the time has the following form:

A nonlinear capacitor is said to be controlled by charge when it is possible to express the tension as a function of charge:

As an example of nonlinear electrical circuit, let us consider the circuit shown in Figure 1. This circuit consists of a linear inductor in series with a nonlinear capacitor. The relationship between the charge of the nonlinear capacitor and the voltage drop across it may be approximated by the following cubic equations [6,7,8] :

where Uc is the potential across the plates of the nonlinear capacitor, q is the charge , and s and a are constants. The equation of the circuit may be written as

where L is the inductance of the coil. Dividing by L and considering that i = dq/dt we obtain the cubic Duffing equation in the form

It is worth remembering that this work provides an exact solution to equation (5) in terms of the Jacobi elliptic function cn. This function is defined as follows:

There are other two important elliptic Jacobi functions, namely sn and dn, which are defined by:

For these equations, the following identities hold: These functions are derivable and so: when m > 1 these functions are defined by the following equations

The following is also defined:

In some cases, it is necessary to deal with a function of the form cn (wt, k) , where w is any number (real or complex) and k is a pure imaginary number, say k= m√-1 where m is a real number. We may define the expression cn(wt, k) = cn(wt,m √-1) in a consistent way by using the formula:

4. Exact solutions for the nonlinear model

In the linear case, the general solution to equation y" (t) + αy(t)=0 is y(t) = c1 cos( √αt + c2), where c1 and c2 are the constants of integration which are determined from the initial conditions y(0) = y0 and y′(0) = y′0 . When a cubic term is added we obtain the nonlinear equation y"(t) +α y(t) +β y3(t) = 0 and the solution cannot be expressed in terms of the cosine function. In this case, the Jacobi cn funtion solves this nonlinear equation. Indeed, direct calculations using equations (11) show that function y= c1 cn (ωt + c2,m) satisfies the following differential equation

for any constants c1 and c2. Therefore the general solution to equation (5) is obtained by solving the system It is worth noting that solution (19) is bounded and non-periodic. This situation is typical for solitons. Some important non-linear differential equations admit soliton solutions that can be expressed in terms of sech.

On the other hand, if

Which is the solution to linear equation y"(t) + α y(t) = 0. This result is consistent with the theory already known for the linear case.

The behaviour of solution (16) depends on parameters α and β as well as on the initial condition q0 In this paper we will consider five cases: 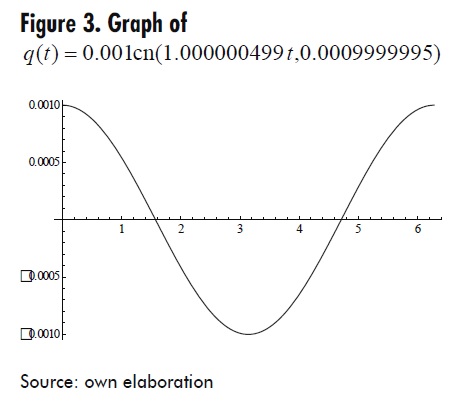 This function is periodic with period T ≈1.894 . The corresponding graph in the interval [0, 2T] is shown in Figure 4 Finally, let us consider a nonlinear circuit consisting of a linear inductor in series with a nonlinear capacitor, as shown in Figure 1. A way to study non-linear circuits by means of the cubic Duffing differential equation has been shown, obtaining an exact solution in terms of a Jacobi elliptic function cn. It was possible to establish conditions under which the solution is periodic and harmonic. This is very important in the study of electric resonators and their applications in engineering. On the other hand, the results (already know) for the linear case were generalized for the nonlinear case in a consistent and natural way. It may be stated that the Jacobi elliptic functions are an essential way to solve many nonlinear problems.

Solutions (24) and (27) turned out to be very interesting because they represent a type of soliton solution (for a more thorough study of these solutions see [9]).

[2] A .I. Maimistov,“Propagation of an ultimately short electromagnetic pulse in a nonlinear medium described by the fifthorder Duffing model”, Opt. Spectros, 94(2), 2003, pp.251-257