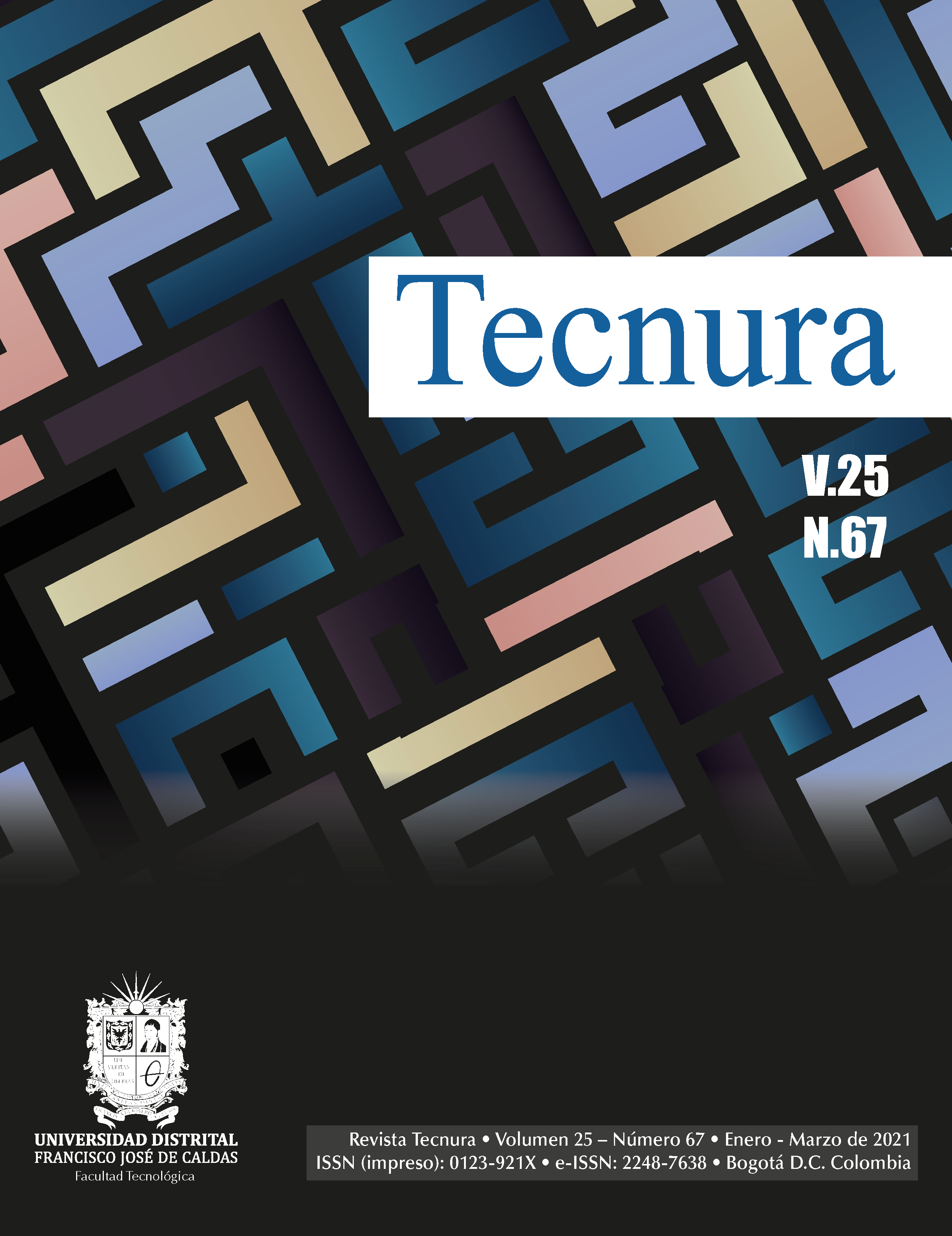 (1)
Rubiano, J.; Chacón Cardona, C. A.; Torres Sánchez, H. Use of the Speed of Sound for Heights Below the Troposphere in Colombia to Determine the Distance of Lightning Strikes . Tecnura 2021, 25, 13-25.

Rubiano, Jonathan, Cesar Alexander Chacón Cardona, y Horacio Torres Sánchez. «Use of the Speed of Sound for Heights Below the Troposphere in Colombia to Determine the Distance of Lightning Strikes ». Tecnura 25, no. 67 (enero 1, 2021): 13–25. Accedido julio 6, 2022. https://revistas.udistrital.edu.co/index.php/Tecnura/article/view/15897.

This paper aims to conduct a study of the speed of sound in Colombia for heights below the troposphere, taking into account the temperature as a function of altitude for a tropical zone, in order to determine the distance of lightning strike.

A speed of sound profile for Colombia was determined by analyzing data on altitude, temperature, and relative humidity in the country. The temperature equation as a function of altitude presented by NASA and the International Standard Atmosphere was taken into account to compare with the data obtained from meteorological stations located in different parts of the country (this stations measure information of temperature and other physical variables). Additionally, a sound profile map of Colombia was obtained using the interpolation in ArcGIS software.

A map of the speed of sound in Colombia was obtained, thus finding the speed range in the country. Likewise, the temperature was determined as function of the altitude for Colombia (a country in the tropical zone), with which it is possible to have data closer to the real speed of sound in the place and determinate the distance of impact of a lighting in land.

The study of variables such as temperature, relative humidity, and altitude helped determine the speed of sound for Colombia. It was also possible to define a temperature equation as a function of altitude for a tropical country; with the speed of sound, the radius of impact of a lightning can be found.

Colombia is a country located in the tropical zone (Del-Rio, Younes, & Pulgarín, 2017), and its altitudes range from sea level and its highest point at 5775 meters (Stančík, 2003). Colombia has 39 meteorological stations located in different places of the country (Instituto de Hidrología, Meteorología y Estudios Ambientales), which belong to the IDEAM (acronym in Spanish for Institute of hydrology, meteorology, and environmental studies), who is responsible of managing the data of climate in Colombia. Within their Website, the IDEAM has data of temperature, weather, relative humidity, altitude, latitude, contamination, environmental quality, and other related variables. Also, it is possible to find in literature different methods for determining the approximate position where a lightning strikes, which mainly refer to observing the lightning and measuring the time until the thunder rings in order to calculate the place of impact (Shevick, 2000). Once this time lapse is registered, this number and the speed of sound can be used to determine the lightning’s distance from the observer.

Now in order to use this method we need to know the speed of sound. And, since the speed of sound is variable and change depending on the altitude and relative humidity of a place (Wilhelm van-Schaik, 2010), the exact location in the country is needed to have all the variables used in the calculations on lightning impact distance. Therefore, we took the data of temperature and relative humidity from the meteorological stations located in the country to find the relationship between these variables and the speed of sound in different places of Colombia.

Figure 1 illustrates the map of altitudes of Colombia and shows the differences in altitude throughout regions, which will modify the speed of sound; therefore, altitude is an important factor that has to be considered when calculating the speed of sound in Colombia.

In Colombia, the temperature is variable and depends on factors such as the altitude, resulting in diverse climates-values from -8 degrees Celsius up to approximately 45 degrees Celsius may be present; (Instituto de Hidrología, Meteorología y Estudios Ambientales, 2015), (Hurtado M, 2015). Figure 2 shows the variability in temperature throughout Colombia.

Conversely, relative humidity does not directly depend on altitude although it might be slightly related to the temperature. However, relative humidity does have a direct correlation to the surrounding vegetation or sources of water (IDEAM), so humidity will rise in a place close to a river, wetland or lagoon, or with rich vegetation, while somewhere with less water bodies will be less humid. Besides, the tropical zone is a region with low-pressure, which will also produce high relative humidity as well as storms.

The IDEAM has 39 meteorological stations, located in different places with different altitudes (0 - 3000 meters) throughout the country. Table 1 shows the list of each station and its altitude (the table lists only 38 stations; the station #39 is located in San Andres Island, which was not considered during this research).

Figure 4 shows each meteorological station located in the country. As stated before, each station is located at a different altitude, latitude, and longitude and stores temperature, relative humidity, altitude, atmospheric pression, and other data.

Relationship Between Speed of Sound, Relative Humidity and Temperature

According to the information provided by these stations, there is a direct correlation between the relative humidity and temperature of a place and the speed of sound in said place. Figure 5 shows this behavior.

Comparison Between Temperature as Dependent to Altitude

This graph shows a behavior similar to that resulting from data from the NASA (model shown in Figure 7). The graph presents the temperature as function of the altitude for each layer of the atmosphere: troposphere, stratosphere, mesosphere, and thermosphere, although our study is focused only on the troposphere, i.e., between 0 and 10 km. According to data from NASA, there also exists a linear behavior that follows the equation below (National Aeronautics and Space Administration, 2018):

Where T is the temperature in degrees Celsius (°C), and ℎ is the altitude in meters (m).

Applying equation (1) from NASA and using the IDEAM data regarding temperature [°C] and altitude [m] for each meteorological station, the trend shown in Figure 8 results.

Figure 8 shows the equation from NASA in a blue dashed line; the average temperature taken from each meteorological station in Colombia is represented with small circles, and the trend of these values is drawn as a continuous red line (the correlation coefficient r 2 of 0.954 and uncertainty of linear terms was Δa = 1.92 x 10-4 and Δb = 2.32 x 10-1) Looking at the behavior of the equation from NASA and the resulting graph in Figure 6, it is possible to say that they are similar: in both cases the temperature at 0 m is approximately 15 °C. However, these results differ from the data taken from the meteorological stations in Colombia that establish 28,045 °C as the approximate temperature at 0 m. The equation obtained for temperature in function of the altitude with data measured in Colombia is:

Where T is the temperature in degrees Celsius (°C), and h is the altitude in meters (m). To calculate the speed of sound with dry-air conditions, the following equation could be useful (Hass, 2017):

However, there are no dry-air conditions in this case, so if there is a variation in relative humidity, Eliakim presents an equation that relates the relative humidity and temperature for determining the speed of sound (Eliakim, 2014):

Figure 9 shows the map of speed of sound in Colombia using equation 4:

To obtain the map in the Figure 9, we used two parameters for determining the probabilities: the location of each meteorological station in the country with the data of speed of sound calculated in its place, and the total studied area of the country.

For estimating the speed of sound in Colombia, we used a Kernel Density Estimation (Thedoridis, 1998). This non-parametric approach estimates the shape of a desired curve using the input data, this estimation applies the equation:

is the probability value of speed of sound at (x,y).

We used the ArcGIS program to calculate this probability. The uncertainty of the measure of altitude is 0.5m, temperature uncertainty is 0.05oC, and humidity uncertainty is 0.5%. The speed of sound in Colombia obtained for the histogram ranges between 332 m/s and 348,80m/s, with a mean value of 346,16 m/s.

If the thermodynamical conditions do not vary significantly in the place of the study, it is possible to use the average of temperature and relative humidity when calculating the radius of lightning impact by applying equation 6:

Where time can be calculated like the interval between the observation of lightning and arriving sound to the place where the observer is. For example, this observer can be a high-speed camera with event recording features. If the camera can register sound, this option might be used for recording the arrival of the thunder; otherwise, it is possible to use an independent sound sensor that records events. Once the camera is set in place for the lightning event, the speed sensor will activate to record the arrival time of both the lightning bolt and the thunder sound; then, it is possible to calculate the radius of impact with this interval and the equation of speed of sound.

We used this calculated speed of sound in other research to determine the direction and distance of lightning impact in transmission towers.

Contrary to the models used in higher latitudes (like that of the International Standard Atmosphere, the temperature as function of altitude is different for countries located in the Intertropical zone. In this paper we defined an equation that models the relationship between these variables in Colombia, a country located in the tropical zone, whose temperature at sea level is 28 °C approximately.

This study is a particular case because the atmosphere in a tropical country like Colombia behaves differently from the atmosphere in Southern or Northern latitudes. These localized conditions have influence in other variables like ground flash density (GFD), temperature range, ozone, and others; also, many atmospheric conditions are different in tropical zone.