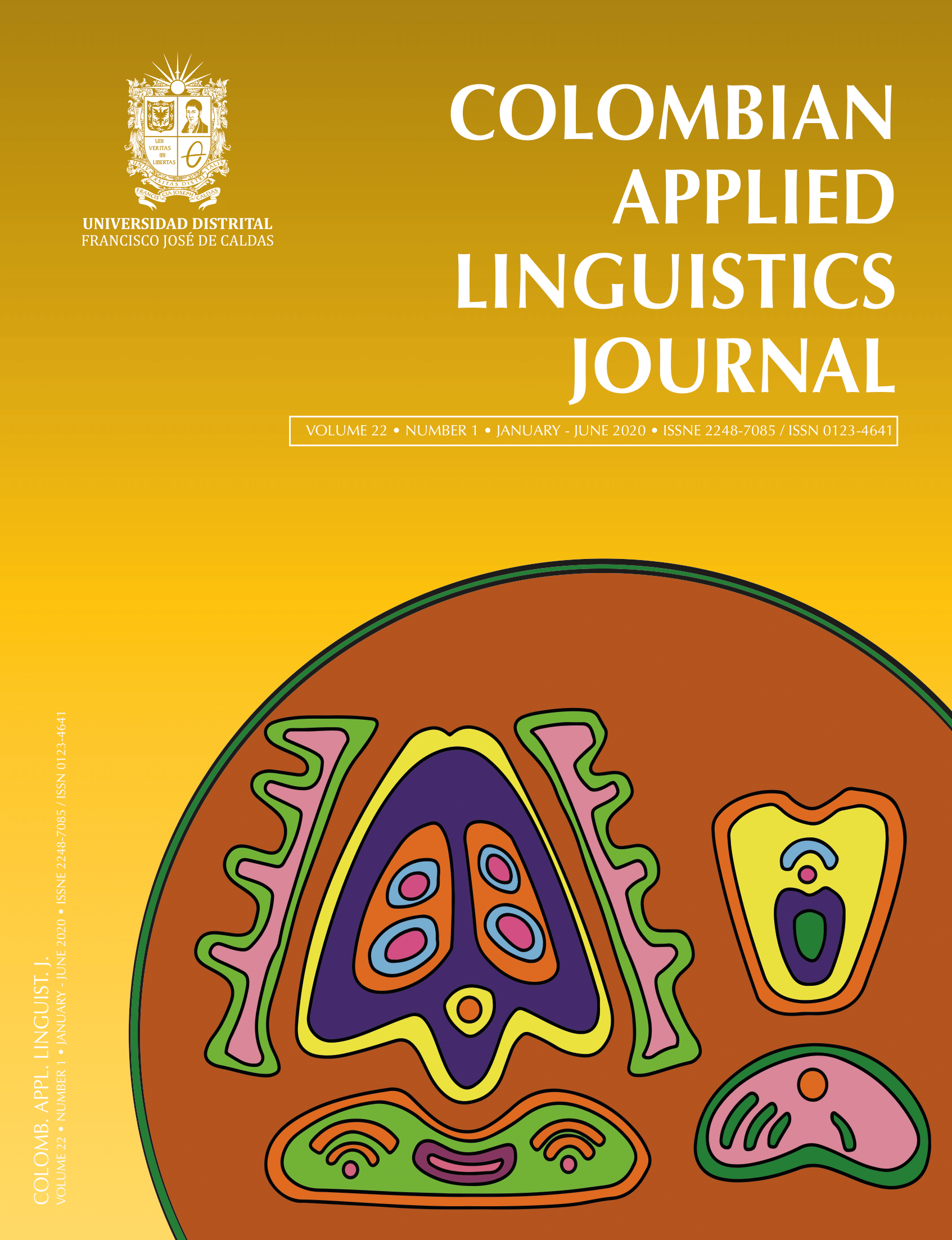 Clavijo, A. (2015). Editorial: Research tendencies in the teaching of English as a foreign language. Colombian Applied Linguistics Journal, 17(1), 3-7.

The Colombian Applied Linguistics Journal has been a space for encouraging language teacher researchers to share their experiences and illuminate others’ experience. In this trajectory, applied linguistics and English language teaching have been intertwined fields, where the integration of theoretical tools has allowed new comprehensions of one another. Authors of the journal have demonstrated this mutual exchange with the multiple outlooks and topics that they have proposed as part of their writings. As mentioned in the previous editorial (CALJ, Vol. 21, Nº 2, 2019), applied linguistics has been useful to determine not only a variety of practices of language teaching and learning, but also the implication of those in broader areas (Quintero & Bonilla, 2020, p. 2). In the same line of thought, the reflections that have emerged in the process of language teaching and learning have originated new inquiries in applied linguistics that have further contributed to both fields. In the commitment that the Colombian Applied Linguistics Journal has taken on, authors continue to explore areas that have a variety of characteristics.

The CALJ was created in 1998 in the Master’s Program in Applied Linguistics to TEFL at Universidad Distrital Francisco José de Caldas with the initiative of publishing contributions from faculty and graduate students of the different ELT programs in Bogotá and Colombia. The areas addressed as well as the approaches of analysis reported in the articles have been myriad. Comprehending the task of teaching English in the classroom has been one of the most representative areas with a good number of articles attempting to show innovative methodologies, curriculum developments, assessment practices and many other attempts to make English teaching more effective. A second area of interest has involved reflective teaching, in which exploring pre-service, in-service and mentoring practices has been the focus for professional development. And a third area has been linguistics as such, which refer to articles examining manifold aspects of language from the theoretical outlooks of related disciplines such as psycholinguistics, pragmalinguistics, structural linguistics in order to enlighten the realm of language and literacy education, bilingualism, and multilingualism.

Through the dissemination of its volumes, the journal moved from having a local to a national circulation and this further opened its scope and contributions. This expansion came with a greater recognition of the journal for its important contribution to the field of English teaching in the country. Basically, the three main areas identified above tend to show a transition from rather instructional-based approaches to more holistic views of language teaching (Clavijo, 2015). They also show a prominent shared interest in pedagogical research to foster the understanding of theories with the aim to bridge the gap with practice (Korthagen, 2001). Therefore, this is an indicator to claim that the evolution of second language teaching theories has always been of concern to language academics and teachers in Colombia. The proposed perspective of the journal has expanded to a global audience of professionals in education, interested in researching issues in the field of applied linguistics and the teaching of languages, where this tendency of analysing the dichotomy of theory and practice continue to be strong.

However, imbued in the areas above, it has also been clear that from the origin of this journal, there have been central interests to its identity. Through publishing partial or final results of research, reflections on praxis, pedagogical innovations, book reviews and reviews on specialised themes; critical pedagogy and literacy as a social practice, for example, constitute the backbone of the journal thinking. These theoretical lens have opened up the opportunity to understand the world as a system of power relations that requires critical individuals (Freire, 1998; Wink, 2005; Pennycook, 2001). Besides, rescuing the voices of those who have been unheard, especially teachers, has also been crucial to provide a view of alternative practices and experiences (Clavijo, 2008). These aspects have been constituents of the journal to compile instances of relevant practices involved in the learning of another language. As a matter of fact, those contributions served as a source of inspiration to formulate three research lines in the M. A. in applied linguistics at Universidad Distrital: i) process of teacher education and development; ii) discourse studies within educational contexts and iii) Literacy studies and local pedagogies for social transformation.

As editors, we want to acknowledge this trajectory as well as to encourage writers to continue enlightening the field. The diverse topics and areas explored in the journal have made prominent the need to see the field from the viewpoint of critical applied linguistics and critical education so that through the intersection of aspects such as gender, ethnicity, culture, politics and ideology, new understandings of teaching a language and applied linguistics emerge. This is a path we consider essential to carry on providing a variety of opportunities to construct new meanings of language practice and language education. Having in mind that the current journal authors now exceed the local context and, therefore, that the CALJ community of authors and readers is now global, our call is to address research concerns from local but multidisciplinary and multidimensional perspectives in which the study of communication practices and language teaching advocates for the constitution of realities that require political agency and aspirations of change.

In tune with that invitation, the editors of this journal believe that teaching English is a social responsibility that is interweaved with broader areas of society. This is why the processes of teaching and learning a language and in turn our role as teachers and researchers gain strength when scrutinised as embedded in social, cultural, political and economic relationships of situated realities. In recent numbers, the journal has already provided significant examples of latent interests in the field that work in those interrelated areas. These examples emphasise language from that ideational perspective concerned with socially-sensitive practices, which genuinely approach specific local views. Some of them touch on issues such as positioning, identity configurations and subjectivity of teachers, learners and other actors in the frame of policies and institutional demands (e.g. Montenegro, 2012; Rojas, 2012; Ortiz-Medina, 2017). Others have undertaken community involvement in language curriculum and development (e.g. Rincón & Clavijo, 2016; Bolaños, Gomez, Florez, Ramirez & Tello, 2018; Comber, 2018); as well as new literacies in the connection of technology and society impacting language teacher education (e.g. Quintero, 2008, Castañeda, 2012; Ekiaka, Feng & Reyna, 2014). In the same vein, other studies have attempted to figure out social and intercultural relationships to grasp the complexities of language teaching (e.g. Hernández & Samacá, 2006; Bonilla, 2012; Castillo, 2013). Finally, we would like to point out other studies that have revisited long-standing concerns on methodology and professional development from a gaze that link language education and applied linguistics with society and culture in an attempt to provide new understandings of dominant discourses of language teaching and learning.

Those reports have been useful to understand plural identities and the continuous configuration of practices and voices that re-signify our role as teachers and our profession. In this number, Muñoz, Carvajal, Lopez & Avendaño underscore learning as a cornerstone to analyse language development with the purpose of providing light to stakeholders and envision renovated practices. Gomez & Walker coincide with Fajardo, Argudo & Abad to investigate views of Content integrated language learning to determine conditions that are necessary to particular situated context of Universities. Lopez-Andrada and Rodriguez & Vargas both attempt to understand the articulation between hypermedia and language learning devising it as an alternative to undertake innovative experiences to learners so that it could work in benefit of their process of language acquisition. Garzón & Posada, by using the lens of imagined communities make evident how learners’ identities are immersed in a fluid process that usually develops in plurality and choice. Furthermore, Bonilla & Samacá attempt to draw conclusions on how social factors such as age-generation can also mediate educational practices, specifically EFL mentoring at tertiary level.

In line with the studies presented here, we consider that continuing the exploration of language teaching in a social amalgam, that is, in a complexity of social values and beliefs, is a way to construct locally relevant knowledge attempting to change environments in which social injustice is perpetuated. As teachers and academics we “should not only have as a goal to create optimal conditions for desired learning…, but also to engage teachers in alternative pedagogical methods that are equity and justice focused” (Kohli et al, p. 9 ; 2015, Kumaravadivelu, 2003, p. 6 as cited in Buendía & Macias, 2019). Taking into account that Colombia, as well Latin America, are places where a search for social justice, equity and respect for diversity are an urgent need and, that language teaching and learning cannot be disconnected to that social reality, this can be an opportunity to share local thinking with the global academic community so that both (the local and global community) may contribute to enriching language and teaching practices for from a vantage point that goes rather beyond the practice of the language per se.