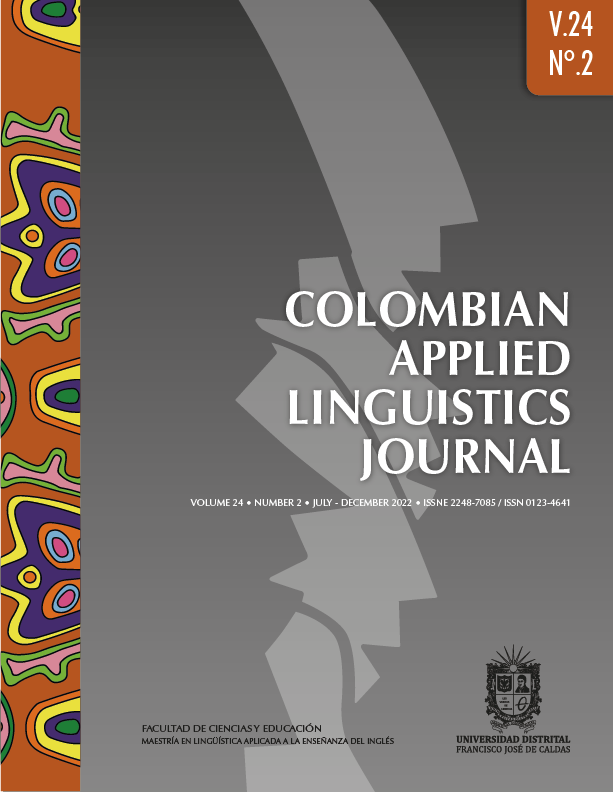 The Interplay between Applied Linguistics and English Language Teaching

Bonilla-Medina, X., & Quintero-Polo, A. H. (2022). English language teaching in times of change and the relevance of

The last editorial note of the Colombian Applied Linguistics Journal (CALJ) (Bonilla-Medina & Quintero-Polo, 2022) draws the readership’s attention not to lose focus on critical perspectives from which to look at language education. It is within the discussion that this note, in this new issue of CALJ, intends make its contribution by clarifying the relationship between Applied Linguistics (AL) and English language teaching (ELT). It also intends to raise awareness about the sometimes-troublesome heavy emphasis on the theoretical object of study (linguistics), which can be applied to a practice that serves merely instrumental goals. The application of linguistic knowledge to the practical tasks of ELT is an activity; it is not a theoretical study, even though it uses the findings of theoretical studies. This makes us think that, while AL and ELT may very well be closely related, they are not one and the same activity.

Those interested in linguistics as a discipline have seen it as having at least three emphases determined by the object of study and their method: theoretical, descriptive, and applied. Regarding the initial issues of this journal, linguistics appeared as the discipline that provided teachers and researchers with theoretical models for them to apply in order to solve linguistic problems. This also extended to improving instructional tasks, aiming to solve immediate language classroom issues. This trend usually drew on mainstream specialized literature that portrayed AL as being scientific, mediating between theory and practice, interdisciplinary, educative, and problem-solving. All of the above has been typically oriented to situations related to ELT (see, for example, de Bot et al., 1991). The knowledge that has been scientifically produced by linguists about the nature of human language, how it is learned, and what role it plays in the life of people and communities belongs to one of the dimensions of knowledge that language teachers are expected to have (i.e., the disciplinary dimension). Even though linguistic knowledge can also be applied to activities other than language teaching, public interest in language teaching and learning has been greater than the interest in those other activities (McCarthy, 2001).

In more current issues of the CALJ, as a rather evolving view, language teachers and researchers have started to propose pedagogical interventions and research studies that consider the role of linguistics in association with other disciplines as mediators (Widowson, 2000) in the understanding and agency of social, cultural, political phenomena surrounding language. Again, regarding ELT as an activity, there is an element of AL in every practical task of it. AL deals with aspects of language teaching that are liable to become a research field, i.e., a field of theory building on language teaching. Nevertheless, that purpose has not yet been fully achieved; it is still a long way from consolidating as such. That justifies a need for research that increases, not in number, but in quality of the knowledge about the multiple dimensions of the nature of language and ELT. It also justifies detaching from prepacked knowledge replication and uniform patterns of general application to start studying situated language phenomena that can be understood from a social and critical perspective.

By the same token, ELT curriculum stakeholders will be expected to develop their own views on language and make them evolve in order to tackle phenomena surrounding ELT. Those views should go in line with the dynamism of knowledge. Different teachers and learners may see language in different ways: as an object of study, as a skill, as a tool, as a behavior, as an event, as knowledge, as a habit, or as an experience. Different views may be relevant for different purposes, and they cannot be regarded as either right or wrong. The articles gathered in the present issue of the CALJ portray just that, for instance, the view of the English language as a means of instruction (EMI) can find in multimodality, podcasts, online debates, tele collaboration, among others, complementary instructional technological means that serve purposes of language development. Likewise, fostering autonomous behavior in language learners calls for ways to balance the cognitive dimension with learners’ emotional and affective domains. The complete list of titles and authors of the articles in this issue of the CALJ follows: the article that opens the journal is titled Saudi EFL University Students Readiness for Autonomous Language Learning by Abuelgasim Sabah Elsaid Mohammed; up next is Exploring Students’ Entry Profiles: English Proficiency Level, Affective Variables, and Academic Performance in a Chilean English Teacher Education Program, and its author is María Ester López and Camilo Ramos Gálvez; then comes Enhancing Oral Academic English as a Medium of Instruction (EMI) through Self-Regulated Listening to Authentic Educational Podcasts by Abebe Yitbarek Wubalem; the title of the next article is Emotions Experienced by Secondary School Students in English Classes in Mexico, and its author is Mariza G. Méndez-López; then comes Exploring Autonomous Behaviors in Language Learning through Video Sharing and Online Discussions in Higher Education written by Marian Lissett Olaya Mesa and Willian Alexander Mora Menjura; this article is followed by Towards a Working Definition of Negotiation in Tele Collaboration: Analysis of Tele Tandem Oral Sessions by Solange Aranha and Laura Rampazzo; then comes Language Policy, Bilingualism, and the Role of the English Teacher: A Review of the Scientific Literature from the Global Environment to the Colombian Context by Reinelio Morales Llano; then comes Integrated Deictic Subtitles Promote Oral Comprehension in Learning French as a Foreign Language when Used in Audiovisual Teaching Material by Mónica Forero Díaz, Leidy J. Moreno, Jonny F. Bernal, José D. Torres and Angie L. Martínez; and the closing article is Increasing Vocabulary Acquisition and Retention In ESL Learners through the Use of Multimodal Texts (Memes) by Pablo Aedo.