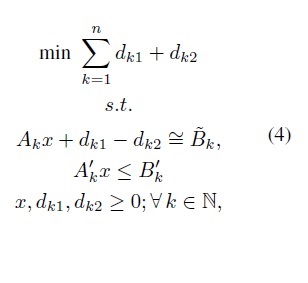 A Charnes and WW Cooper. Management models and industrial applications of linear programming, vol. i, 1961.

This paper presents a proposal for solving goal problems involving multiple experts opinions and perceptions. In goal programming problems where no statistical data about their goals exist, the use of information coming from experts becomes the last reliable source. This way, we propose an approach to model this kind of goals using Interval Type-2 fuzzy sets, and a simple method for finding an optimal solution based on previous methods that have been proposed for classical fuzzy sets.

Decision making in practical applications faces multiple issues, including human being interaction and social behavior. Some problems are built over the base of having multiple goals involving multiple experts that try to solve the same problem with different objectives. To solve this kind of situations, goal programming provides a first tool to find crisp solutions.

To handle the problem of having both multiple experts and uncertainty around the exact value of a desired goal, fuzzy sets appear as a useful tool for handling numerical uncertainty coming from experts. fuzzy goal programming has been proposed by Narasimhan [15], and later developed by Yang [20], Turgay & Takin [18], Li & Gang [12],Hu, Zhang & Wang [9], Khalili-Damghani & Sadi-Nezhad [10], in both theoretical and practical situations.

In decision making, Qin & Liu [17], Zhang & Zhang[21], and Chen&Ting[4]have already used Type-2 fuzzy systems to handle uncertainty coming from multiple experts, so its use in goal programming seems to be feasible.

Based on the model of Narasimhan [15], Yang [20] has proposed a model with fewer variables which obtains the same solution, so what we propose in this paper is to extend their results to a case where multiple experts deal with multiple goals by using Interval Type-2 fuzzy sets to handle linguistic/numerical uncertainty coming from experts and Linear Programming (LP) methods for handling goal programming.

The paper is organized as follows:Section 1 introduces the main problem. Section 2 presents some basics on fuzzy sets. In Section 3, goal programming LP model is referred. Section 4 presents the Yang [20] proposal for fuzzy goal programming. Section 5 contains the proposal; Section 6 shows an application example; and finally Section 7 presents the concluding remarks of the study.

In general, a Type-2 fuzzy set is simply a function that transforms a set A into the set of fuzzy sets defined over [0, 1], this is Ã :X → F[0, 1], where F[0, 1] is also known as the secondary membership function of Ã. An Interval Type-2 fuzzy set (see Mendel [13]) is an ordered pair {(x, μÃ (x)) :x ∈ X }, where A is a linguistic label Ã that represents uncertainty about the word A. Its mathematical definition is:

The main reason for using fuzzy sets is its ability to handle uncertainty coming from human perceptions, which is a common issue in decision making. On the other hand (numerical uncertainty), fuzzy sets can handle imprecision about X which commonly appears when no historical/statistical data is available, so the estimation of the parameters of the problem is based on approximate information coming from the experts of the problem.

The basic goal programming model proposed by Charnes, Cooper & Wagner [1], [2] tries to minimize deviations from different goals (desired objectives) through minimizing the absolute deviations dk of the constraints of the problem Akx regarding its desired value (a.k.a goal) Bk in the format min {D = ∑ nk=1|Akx-Bk|}. This model is equivalent to the following LP model (see Charnes, Cooper & Wagner [1], [2]):

Although the first fuzzy goal programming has been proposed by Narasimhan [15], Narasimhan & Hanna [7], Yang [20] has proposed a model with fewer variables which obtains the same solution of [7], [15]. Yang's proposal starts by defining the membership function of the fuzzy goal Bk namely μBk, as follows:

where k ∈ N denotes the kth goal, Gk(x) is the kth constraint to be fulfilled, bk ∈ R is the aspiration level of the kth goal, and dk1 and dk2 are the maximum negative and positive deviations from bk, respectively. Its LP model is

Finally, the proposal of Yang [20] is based on a simpler LP model in which G(x) ≡ Akx, as follows:

where λ ∈ [0,1] is the global satisfaction degree of all goals.

Disagreement among people who are involved into decision making is a common issue in real scenarios. Some people is pessimistic while others are optimistic about different goals. This leads to have different perceptions coming from different experts, so we handle those perceptions using two functions LMF and UMF which are defined as follows: 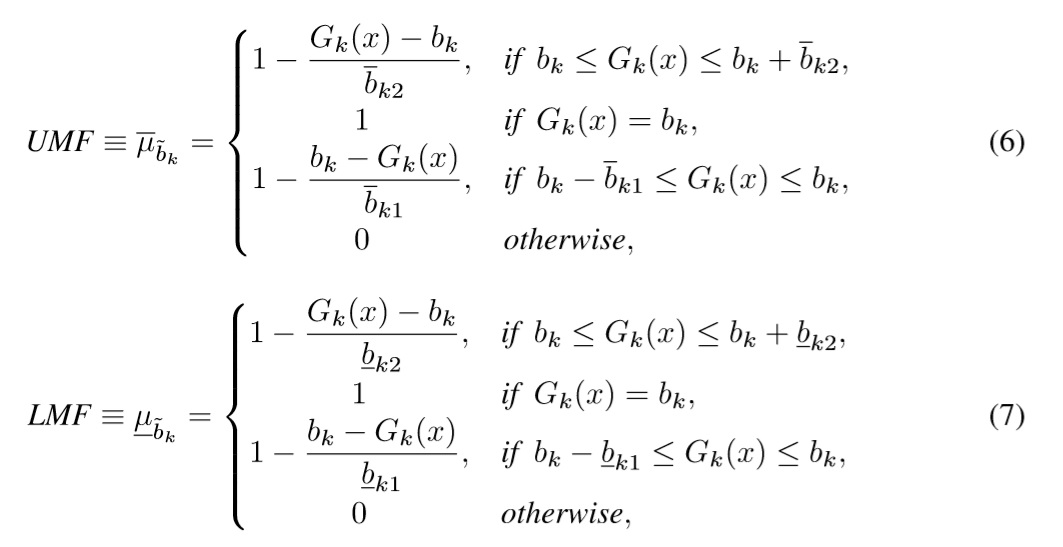 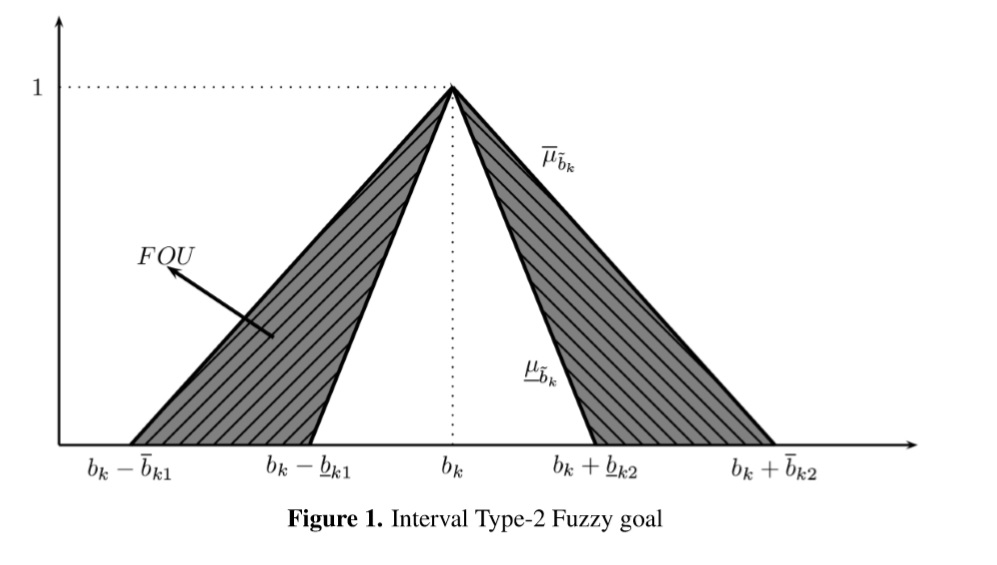 where ∼Bk ∈ F2 is the Interval Type-2 fuzzy aspiration level, dk1,dk2 ∈ R are negative and positive deviations from the goal Bk, Ak is the set of n constraints, and x ∈ Rm is the set of decision variables of the problem.

Therefore, we extend the proposal of Yang [20] to a Interval Type-2 fuzzy model using a two-step method that finds two different λ values, one for ¯μ˜b and one for μ˜b. To do so, we have to solve the following two LPs: 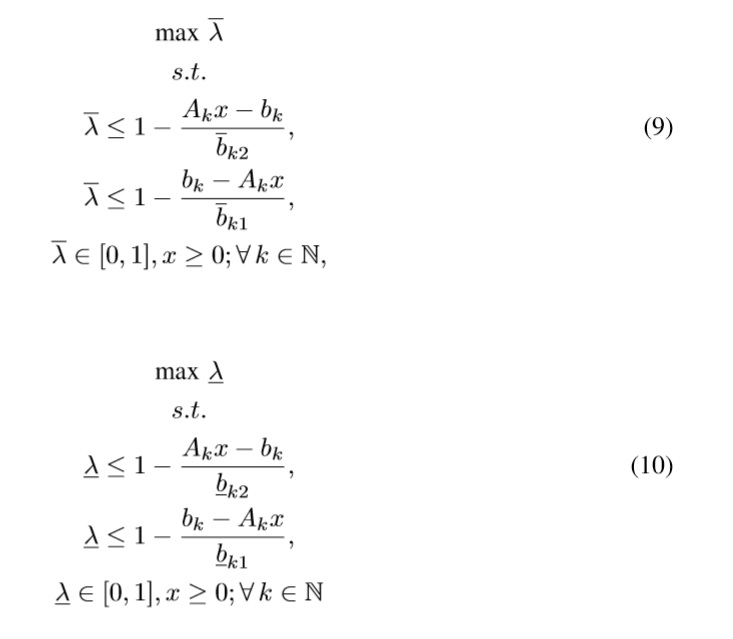 As application example we use the proposed by Narasimhan [15] and extended by Chen & Tsai [3] which is composed by three fuzzy goals, as shown as follows:

where x1 and x2 are the manufacturing quantities of two products which regard to three goals:G1 is a profitability goal, and G2 , G3 are the expected selling quantities per product. The maximum deviations from Gk = {630, 7, 4} are symmetrically handled where bk1 = bk2 = {10, 2, 2}. 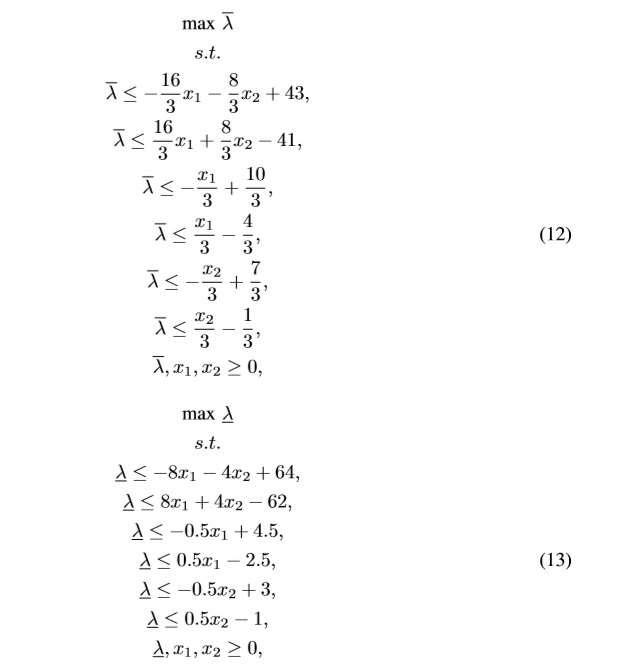 Both models reach the same values of the decision variables x1 and x2 which is a logical solution since all deviations are defined as L1 distances using ¯λ and λ as linear functions of dk1 and dk2. The optimal values ¯λ* = 0.76 and λ* = 0.64 are global satisfaction degrees, which means that all three goals are satisfied at the same level. 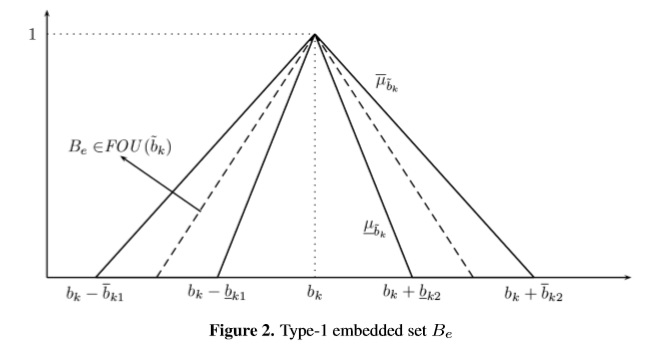 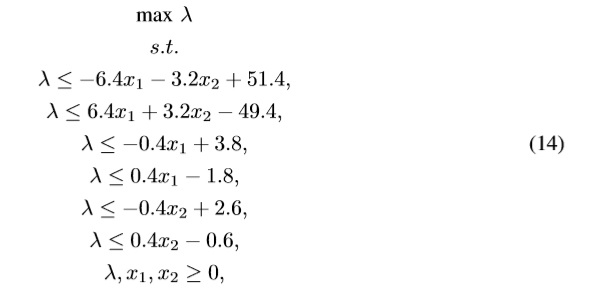 We have presented and solved an extension of the fuzzy goal programming basic model proposed by Narasimhan [15], Yang [20] ,and Chen & Tsai [3] to a Interval Type-2 fuzzy environment, which includes linguistic uncertainty and numerical imprecision coming from multiple experts opinions and perceptions.

Our approach gives the model flexibility to find other kind of solutions in cases where the system has no the ability to fulfill all goals. As higher λ* as closer to the goal the model is. ¯λ and λ describe overall optimistic and pessimistic satisfaction degrees regarding different experts of the system.

The second example shows an embedded set Ae into FOU(˜bk) whose optimal satisfaction degree λ* fits into the range [λ, ¯λ] as described in the Appendix 2. This helps decision making when having multiple experts and helps to see how different selections of Ae affect the problem.

1. A. Charnes and W. W. Cooper. Management models and industrial applications of linear programming, vol. i, 1961.

8. Milan Hladík.Weak and strong solvability of interval linear systems of equations and inequalities. Linear Algebra and its Applications, 438(11):4156-4165, 2013.

This appendix contains the results of the optimization process for the first Interval Type-2 fuzzy goals example. 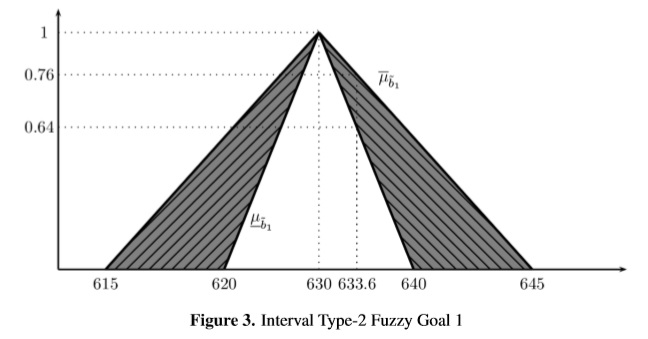 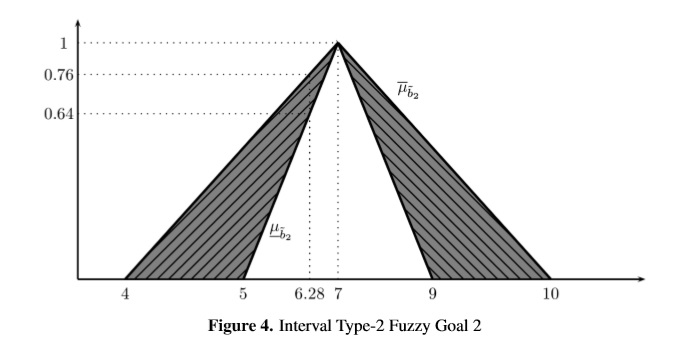 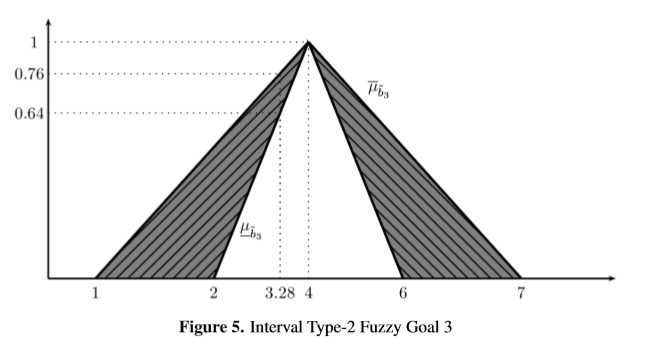 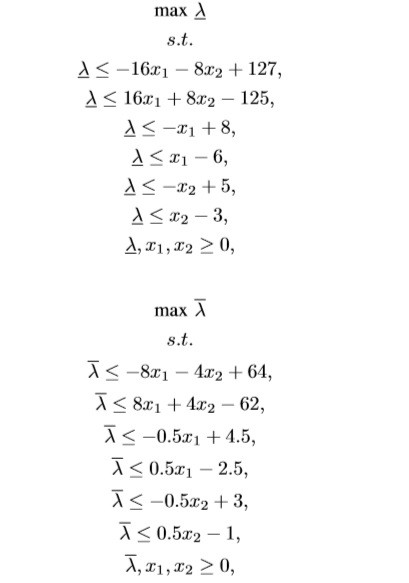 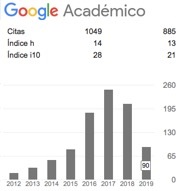 Information for Authors and Reviewers

Formats and Guidelines for Authors