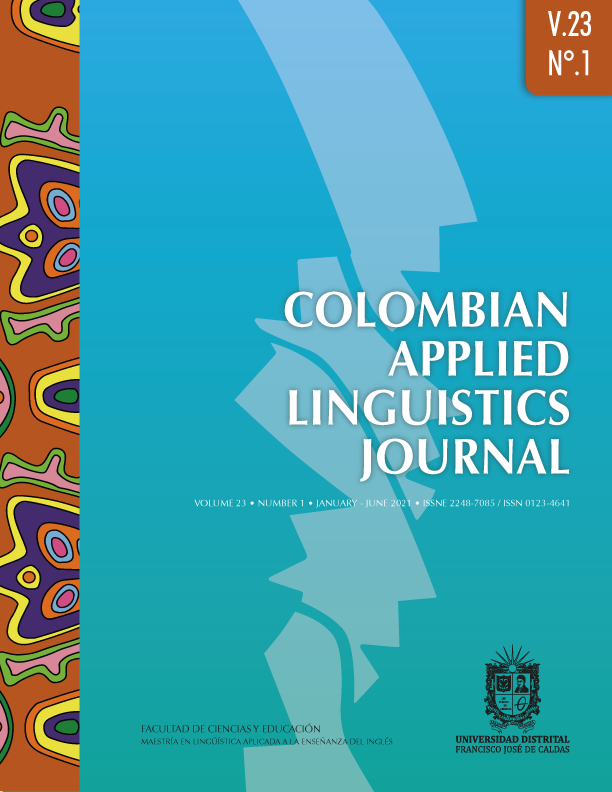 S. Ximena Bonilla Medina is a Doctor of education from the University of East London. She also holds a M.A in applied linguistics for TEFL from Francisco Jose de Caldas Distrital University and a BA in Spanish-English from Pedagógica University. She is currently the director of the Language Institute at Distrital University, a professor and researcher of the same university.  She is a member of the research group ESTUPOLI and director of the “semillero”: second language teaching and learning, culture and social justice. Her research interests are: race, interculturality, teacher education and technology within a humanistic approach in language teaching.

Mora, R. A. (2011). Challenges and Opportunities for Literacy and Technology in ELT Teacher Education. Online Submission.

We have been living in hard times since 2020 when a health emergency was initiated by the COVID-19 pandemic. All around the globe, teachers and students have faced changes that have transformed not only academic procedures, but also social life. In spite of these compromised circumstances, we have seen how authors have collaborated in sending their papers to the journal and have tried to show how the impact of social and academic practices have affected their attempts to educate in the pursuit of an improving world. Some of these approaches are part of this number and others will be part of the upcoming ones. Accordingly, and, coinciding with Freire’s centenary, we want to acknowledge that the experiences shared in this journal constitute the evidence of how teachers, professors, researchers and educators in the field of applied linguistics, maintain their commitment faithfully to their profession; work that is notoriously underpinned by a pedagogy of hope.

According to Rincón (2021), the internet revolution has come with a transformation of culture, which has brought what he called, “the species cultural mutation in a digital ecology” (para, 4). This is a phenomenon that aligns with what Ferrés (2003) coined as, “spectacle culture”, referring to the new senses that have been emerging from the interaction of humans with technological devices. These interactions are full of visual aids, multiple sounds, colours, videos and forms condensed in movies, video clips and general multimedia environments and have been a point of reference in theoretical reflections for some time in education. However, and more notoriously, they also became a nerve centre of discussion when the pandemic situation arrived. Although the study of this ‘cultural mutation in a digital ecology’ has contributed to the understandings of changes and new challenges in education, such as the need to develop more practical and entertaining practices (Bonilla & Samacá, 2020), or the inclusion of multimodal pedagogies (Mora, 2011; Li, 2020; Alvarez, 2016), studies developed by Andrade, Pereira and Clementino (2021) convincingly suggest that the critical points of analysis should also include the broader social, economic and political dimension of the crisis.

Thanks to the results of (a) research aimed at identifying the factors that have affected education in emergency times, Andrade et al (2021) demonstrate that social distance, technological problems, internet access, health preoccupation, computer capacities, and abrupt curricular changes have been some of the many aspects that have intensified social inequality; something which is more evident, in the Latin-American context. Following De Sousa (2000), that growing inequality has been an index to place the ones in South beyond the South [1] ; that is to say, to widen the gap between the wealthy and the poor populations due to precarious socio-economic opportunities to access technological communication. In this regard, Unigarro (2020), illustrates how connectivity, access and technological tools, along with factors of time and amenities, have come to be crucial to increase this socio-economic distance.

In this context, the legacy of Paulo Freire (2000) is pertinent here to highlight that education is always a place of struggle where social injustice should be contested and fought. Hence, language teaching and learning should be seen as immersed in social practices that engage power relationships involving race, gender, class and age; aspects that should be analysed closely in the centre of educational action, so that social transformation is maintained as a general goal. In the case of language education, this objective takes importance because language is not only a means for representing realities, but because it is also a way to create social realities (Pennycook, 2010). As we have argued in previous editorials, the authors’ contributions in this journal are examples of how the community of educators and researchers in the field of ELT are conscious of the connections between language, education and the social world and, therefore, this awareness is pivotal for their production. In this number, we gladly present articles that are honest attempts to introduce language teaching and learning analyses in multidimensional interrelationships that enrich the academic field.

The article by Hernandez, Chi and Ortiz shows awareness of language interconnections that a Frerian view would advocate as it represents a preoccupation for understanding the sources and the facilitators of language learning. This paper helps us see that language learning should not take place as detached from the social reality. It is suggested that, due to the influence of multiple non-human sources from where learners are exposed to language, teaching practices should be constructed more holistically. That is, a variety of sources of language input should be integrated and addressed critically in the classroom to develop fruitfully, not only learners’ language skills, but also their social understanding.

In the same fashion, articles such as the one by Marín-Hine and Rodríguez highlight how communication in another language does not come as a mechanical exercise that results successfully from repetition and reproduction. The authors reinforce the idea that beyond repetition, language is a thinking activity that demands stimulation and scaffolding development. This is why they consider that second language production complements harmonically with the development of the individual’s mother tongue and that educators should motivate learners through thinking visible didactic sequences.

In the line of the discussion that initiated this editorial note, Neiva’s article is situated at the core of media literacies. By following a pedagogical intervention, she represents a pedagogical practice containing workshops where she artfully included the analysis of the news contrasted with learners’ realities, beliefs and attitudes. This proposal shows how by developing critical exercises with students, opportunities are provided for learners to state critical positions vis-à-vis social reality, in which it is clear that language can be used deliberately to be more analytical about the world we live in. Trying to reveal additional elements involved in the endeavour of English language learning, Lizasoain, Walper, Ortiz, Sepulveda and Catripan address non-verbal communication. Their paper displays the importance of seeing gestures and corporeal movements as constructors of meaning, collaborating in communication which are usually overlooked in language learning. They claim their study shows that there is a need to link up verbal with non-verbal language understanding in teacher education programmes. According to them, enriching the awareness of those elements in teacher education would help future teachers construct language learning experiences that cooperate with their potential students to meaningfully benefit from their learning experiences.

Stemming from pre-service teachers’ educative environments, Viafara illustrates the complexities of knowledge grounded in the reality of rural schools. He explains how pre-service teachers usually approach the teaching practicum from an ideal viewpoint far from reality, which derives in an alienation of what is learned, the learning communities and cultures implied in the process. The study aligns with the claim to include socio-cultural perspectives in the language curriculum, so that future teachers strengthen their language teaching standpoint as well as their future learners’ practices.

Another important area explored as part of the inquiry of teachers’ knowledge shared by the authors in this number includes the paper by Villarreal and Mendez. This article brings up a reflection on how policies of inclusion demand teachers to expand their knowledge beyond the boundaries of technical training received in their initial teaching formation process. From a critical view, their proposal raises awareness of how the discourses imposed by those policies of inclusion, many times, set teachers on struggles of the self as they also disempower them by conditioning their views about their students. In general, these authors stress that teachers overcome difficulties such as the one with functional diversity [2] despite both the lack of tools provision and the cultural misunderstandings that shape their own views.

Finally, analysing the same area of inclusive education, but from a different perspective, González-Reyes, IbáñezAcevedo, Inostroza-Araos and Strickland develop an examination of pedagogical actions that are necessary to enact those policies. In this regard, they propose teaching strategies based on visual aids that can be used to facilitate learning to deaf students. In accordance with their rationale, those strategies better exploit deaf students’ capacities and enhance appropriately their language learning processes.

In the same way that these contributions have done and going back to the outset of this editorial note, we reiterate that despite the current world health emergency, teachers show in their work that they tirelessly continue to contribute to building a better world, although their efforts certainly reflect resistance, as desired by Freire. We need to continue in this struggle, looking for different ways to teach, for alternatives of evaluation, but more importantly, as language teachers, for reinventing education to find scenarios where learning about the world is facilitated through the learning of a language. In this context, education becomes a tool for social transformation. Rincón (2020) maintains that practicing Freire means living education as an intercultural exercise. This exercise implies a critical view of culture or “counter-culture” (contracultura) that fights homogenisation in which we have been historically immersed by following patterns of consumption and technology. This is a fight to recover the value of the ones that have not been heard and an encouragement to be able to establish more egalitarian relationships through dialogue; going beyond the shape to transform the sense is our call.