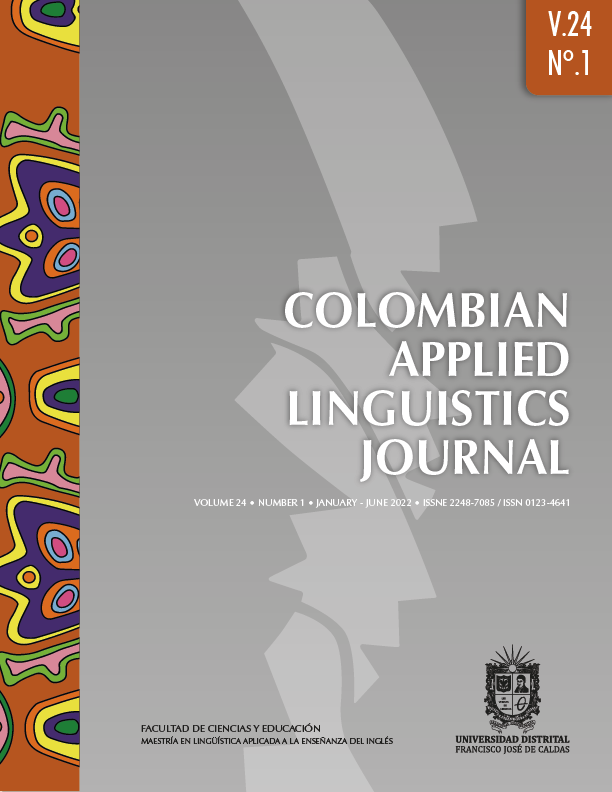 S. Ximena Bonilla Medina is a Doctor of education from the University of East London. She also holds a M.A in applied linguistics for TEFL from Francisco Jose de Caldas Distrital University and a BA in Spanish-English from Pedagógica University. She is currently the director of the Language Institute at Distrital University, a professor and researcher of the same university. She is a member of the research group ESTUPOLI and director of the “semillero”: second language teaching and learning, culture and social justice. Her research interests are: race, interculturality, teacher education and technology within a humanistic approach in language teaching.

Munni, B. E., & Hasan, S. M. (2020). Teaching English during COVID-19 pandemic using Facebook group as an LMS: a study on undergraduate students of a university in Bangladesh. Language in India, 20(6), 76-94. http://www.languageinindia.com/june2020/benazirenglishcovidbangladeshfacebookeducation1.pdf

The world is continuously moving and facing diverse changes that result in social, cultural, economic, and political transformations. Sometimes, those changes are unnoticeable, but, other times, they represent abrupt and sudden changes. An example of one of those changes, which came in an untimely fashion, is the global health emergency due to the COVID-19 pandemic. Through this journal’s lens, as observers of world affairs, we witnessed teachers and researchers’ efforts to face the challenging situations arising from that scenario, as well as the way in which these works represent traces of resistance in difficult times ( Bonilla and Quintero, 2021 ). Curious about the direction that English language teaching research was taking, and going beyond the scope of this journal, we identified that the concerns in general education overlapped the issues of the pandemic and the need to understand these problems together with the role of technology. In this sense, we also realized that English language teaching was in line with that landscape, where proposals in the same direction were reflected and developed. In other words, the health crisis was a period in which English language teaching took interest in online education, virtual interaction, and distance and remote education (see Farrell and Stanclik, 2021. Mahyoob, 2020. Atmojo and Nugroho, 2020 ). There was also interest in the acquisition of capabilities which could be expanded through digital apps such as WhatsApp or Facebook (see Al-Jarf, 2022. Munni and Hasan, 2020 ) or in the management of virtual platforms such as Zoom, Google Meet, and other live-streaming services (see Keshavarz, 2020 ). These devices illustrate how educational interest focused on digital competence and e-learning.

Within understanding the digital environment, the discussion on teaching and learning also focused on highlighting autonomous learning as a relevant issue to approach education in current times ( Keshavarz, 2020 ), just as interests were centered on seeing how students could be producers of content ( Niño, 2022 ). During said studies, some queries emerged on assessing the time and quality of exposure to online materials ( Altam, 2020 ); on how assessment could correlate the new forms of the teaching-learning process; on the acceptance of students and teachers with these new methodologies; and on also evaluating the effect that those approaches to education had on the actors’ emotions. To summarize, the many issues cited in the authors’ wonderings seem to be generally enumerating the challenges and opportunities that the situation had brought ( Atmojo and Nugroho, 2020 ).

All these reflections certainly brought important advances for the field of English language teaching and general education; we became aware of the multiple resources that technology can provide, which remained unexplored due to lack of knowledge. However, that situation also caused uncertainties about the future direction of education once the pandemic is over. Despite the difficulties that we all had while responding to to that abrupt change, by government decision, we turned from 100% online interaction to 100% face-to-face education this year, expecting teachers to be ready to cope with this new stage.

There are still many questions. For example, what was gained and what was lost in this pandemic? Surely the gains are on the side of technological knowledge, as it has been reported by the multiple studies –some of them cited above and also present in this volume of the journal– and probably on the interest in approaching school practices that integrate parents in students’ learning ( Lase and Daeli, 2021 ). But what has been lost? What is happening within the current transition? How are the post-pandemic relationships between students, teachers, and general educational actors in general? How much have educational settings and life in general changed after all this?

Unlike what happened during the pandemic, in which publications analyzed the experienced situations, the post-pandemic stage does not seem to have had an impact on the explosion that caused this level of interest. It is striking to see that postpandemic publications are much fewer, and the ones that do emerge appear to maintain their attention on technology –just in the same direction it had during the hardest times of the pandemic. Therefore, it is most probably necessary to recall the need to have a social and cultural view of language teaching, so that we do not lose ourselves in the instructional and instrumental issues of language while there are broader areas that should be part of our educational concern. As Weedon (1997) said, “language is the place where actual and possible forms of social organization and their likely social and political consequences are defined and contested. Yet it is also the place where our sense of ourselves, our subjectivity, is constructed” (p. 21, as cited in Norton, 2000 ). This is why it is necessary to see how we are integrated in the world and how language plays a role for individuals to provide meaning to that world.

According to the previous idea, it is important to contemplate the many social events that have transformed our lives in postpandemic times, not only at an educational level. Some of them, as reported by UNAM (2020) , include increased online sales, which have changed people’s rhythm of life and even mobility and their relationships. Other changes have taken place with regard to certain activities that people now do more frequently. For instance, people have dedicated more time to watching television, to online platforms for film consumption, to takeaway food purchases, and to online payment. From a broader perspective, the growth of multinational and large telecommunications enterprises varied; they increased their capital, whereas other companies (usually poor or small enterprises) lost theirs. The process leading some companies to be part of the latter is a deep economic transformation. It is also necessary to mention the situation created by financial entities, which offered help to people in debt and have done nothing but increase their debts, even leading them to bankruptcy.

All the social concerns mentioned in the previous paragraph constitute enriching areas to situate the language in a social perspective and, more importantly, in a critical view, a view that, as teachers, we can use to make language more vivid and real. Following Fairclough (1992) , studying language implies seeing it as a social practice, that is, paying attention to its social dimensions, “to issues of concern in social analysis such as the institutional and organizational circumstances of the discursive event[s] and how that shapes the nature of the discursive practice[s], and the constitutive/constructive effects of discourse” (p. 4.). In this sense, building upon Weedon’s ideas (1997, as cited in Norton, 2000 ), language is the bridge to connect individuals with society and bind them to it by involving them in the analysis of social reality. It is true that face-to-face interaction vs. online learning was of great concern, but we must pay attention to societal problems and their transformation, which, in the end, constitutes our main goal as educators. This is why we call for fostering social sensitivity, in order for language to serve as a view of society ( Wetherell and Potter, 1992 ). This premise leads us to see how society reproduces imaginaries and boundaries hidden in language. This also implies the need for critical actors who are aware of normalized structures and categories that reproduce inequality.

Thus, critical views of language acquire strategic importance, given that they provide us with an awareness of the particularities of our context –our context as Latin-Americans, as Colombians– and the implications that this brings to learning new languages such as English. It is also important to be aware of the way in which conflict in the world affects us and others and how we cannot ignore them (for example, the war between Ukraine and Russia). English teacher sensitization broadens our view of how emotions derived from those conflicts play a role in our lives. In this vein, we emphasize the need to preserve critical perspectives on language teaching and learning, which now have been more popularly spread through decolonial perspectives, critical pedagogy, and post-structural views of language and teaching, to name a few. These views are not separated from the social reality that they seek to transform, and they aim to achieve a more inclusive and open society. We believe that those views maintain our critical mindset to sharply look at our exercise of language teaching and research, so that our professional work remains committed to social needs.

In this journal number, we acknowledge the authors’ expressed interest in understanding the multiple dimensions of language teaching and learning, and we appreciate the effort they make to integrate a view on social issues in their language perspectives. Onyema explores the perception of teachers of English as a foreign language (EFL) towards morphological movement in the meaning of texts. Papadima and Herrera-Mosquera et al. present an approach to the way in which assessment should be carried out, broadening their view to see it from other perspectives beyond the traditional ones, this time from the viewpoint of learners from a public university. In line with the issue of the pandemic and expanding this knowledge, Quitián-Bernal and González-Martínez explore the world of technology and provide a view of autonomous learning promoted by video sharing and the benefits of blended learning as educational tools. Ortiz-López explicitly discusses how English learning from a critical perspective could also be the means for learners to construct and reshape their habitus. Mede and Budak inquire about the role of emotions in language learning and their relationship with the process. Finally, we have Castañeda-Trujillo et al., who contribute with two innovative perspectives language teacher identity: from the view of teachers’ professional development and from a gender perspective.