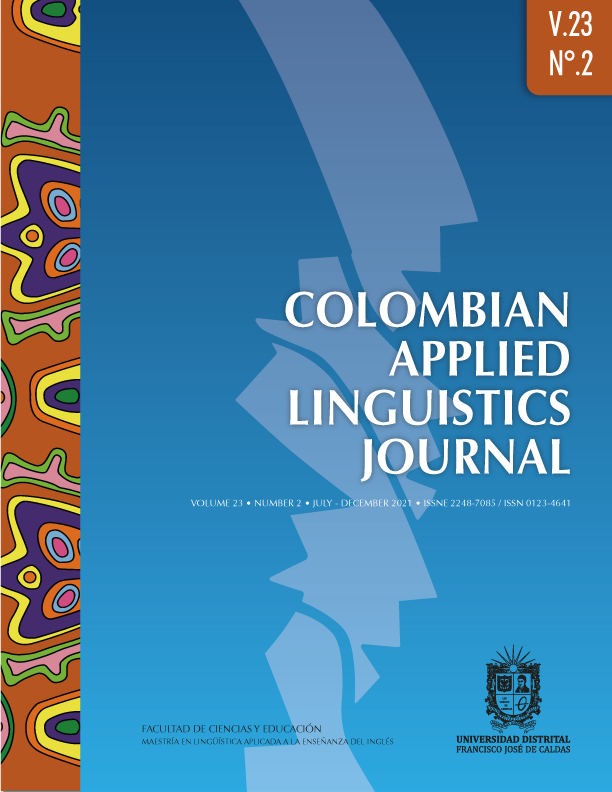 The Thirtieth Anniversary of Our MA In Applied Linguistics To ELT: A Commitment to the Critical Dimension of Language Education

S. Ximena Bonilla Medina is a Doctor of education from the University of East London. She also holds a M.A in applied linguistics for TEFL from Francisco Jose de Caldas Distrital University and a BA in Spanish-English from Pedagógica University. She is currently the director of the Language Institute at Distrital University, a professor and researcher of the same university.  She is a member of the research group ESTUPOLI and director of the “semillero”: second language teaching and learning, culture and social justice. Her research interests are: race, interculturality, teacher education and technology within a humanistic approach in language teaching.

The Thirtieth Anniversary of Our MA In Applied Linguistics To ELT: A Commitment to the Critical Dimension of Language Education

This issue of the Colombian Applied Linguistics Journal, CALJ, coincides with the commemoration of the thirtieth anniversary of the MA in Applied Linguistics to ELT of Universidad Distrital Francisco José de Caldas. Every actor of the MA embraces an evolving critical approach to researching the humanistic, social, cultural, and political dimensions of language education. To be consistent with an intended critical perspective in the face of language issues that relate to the practices of social agents within and outside educational settings, every actor of the MA does not want to be only a mere spectator of what is happening in Colombia and around the world. The Colombian Applied Linguistics Journal is itself an illustration of the activities originated in the MA program that account for such evolution.

The commemoration of the thirtieth anniversary of our MA program leads us to think of what the main concern of the graduate program has been and how the CALJ has found its place about such concern along the years. At an initial stage, the MA program associated applied linguistics with the disciplinary knowledge that language teachers were expected to have of linguistic studies applied to language teaching. There was an emphasis on language as an object of study. This emphasis related to the knowledge that has been scientifically produced by linguists about the nature of human language, how it was learned, and what role it played in the life of people and communities. Even though applied linguistics and language teaching appeared associated, little attention was paid to the fact they were not one and the same activity. The application of linguistic knowledge (i.e. theory consumption or use) to the practical tasks of language teaching was more like an activity rather a theoretical study (i.e. theory production). This was influenced by the Anglo North American schools that set paradigms on how to teach best (Grabe & Kaplan, 1992).

Knowledge is not static, and linguistic knowledge is no different. In spite of the fact that there are aspects of language that have been studied for hundreds of years, a concern that emerged at a later stage of our MA was that applied linguistics dealt with aspects of the language teaching activity that were liable to become a research field. A field of theory building that justified a need for research that increased, not in number, but in quality of the nature of language and language teaching. The professors and students of our MA started to tackle such concern with a reflective attitude and from a critical perspective to look at the direction applied linguistics was appearing to move in language teaching: language as a complex individual and social phenomenon.

Similarly, the professors and students’ reflective attitude and critical perspective served the purpose of elucidating the dichotomy that Davies & Elder (2004) posed “Linguistics applied” or “applied linguistics”. It was a dichotomy about the focus of linguistics as a discipline that can be applied to “solve” linguistic problems, i.e., linguistics applied, and a focus on the role of linguistics in association to other disciplines and language as mediators. i.e. applied linguistics, in the understanding and agency about social, cultural, political phenomena that surrounds language. Such elucidation, in a recent stage of our program, has led the MA to focus on some forms of the critical in applied linguistics (Pennycook, 2001) as a projection towards postmodern and poststructuralist scenarios with the intention to challenge instrumental views of language as static and as product, and more for the social relevance and emancipatory dimensions of language education research as a problematizing practice to search for alternatives that redefine the goals, politics, theoretical basis, and focus of analysis.

The Colombian Applied Linguistics Journal has played a key role in the evolution referred to above across the stages of the MA. It has gathered authors that have created a voice to reflect, discuss, question, and share their studies about issues of ELT both locally and globally. It was after the initial stage of the MA that the Colombian Applied Linguistics Journal started as an editorial initiative to publicize the pedagogical and research experiences of mainly the MA actors. In a subsequent stage, the journal expanded its scope to other programs related to Applied Linguistics and ELT in other Colombian universities and later to other foreign universities. More recently, the CALJ, at the same time it fulfilled parameters of the policies of national and international indexation and classification organizations, it became an important reference in a conversation among researchers with a common interest in views of language and language education other than the instrumental one.

With the ideas above in mind, this CALJ issue offers its readership an attention-catching array of manuscripts that starts with a text by Mónica Chamorro Mejía titled Spanish as L2 in Namtrik-speaking Bilingual Learners in Child Age: Study of Linguistic Attitudes. The author reports on a study on the linguistic attitudes of a group of Misak children who speak Namtrik as their L1 and Spanish as an L2. Those linguistic attitudes are about the spoken Spanish in Colombia, including the Namtrik-marked spoken Spanish variety within the Guambia Reservation in the southwest of Colombia.

Another article is titled On the Teachability of Figurative Language: Teachers’ Perceptions of the Role of Metaphor in English Language Teaching in Chile and its authors are Leonardo Veliz and Scott Smith. The authors’ main concern in this text is the the teachability of metaphorical language in Chilean EFL classrooms. They set out to study six English language teachers’ perceptions on the said concern by means of interviews. More specifically, the study contemplated three issues, one about the views and definitions of metaphor; other about the teachability of metaphorically used language; and another one preparedness to teach metaphor.

The title of the following manuscript is Commodity, Immunity, and Struggle: (Re)visiting Senses of Community in ELT. In it, Julia Zoraida Posada Ortiz and Harold Castañeda Peña, show how autobiographies of four English language pre-service teachers account for a “constellation of communities of fear”, among which are the teacher education program and the teaching practicum. The notion of community that is mainly discussed in the article and that has implications for ELT is “community as commodity, as immunity, and as struggle”.

The next article is Teacher and Portfolio in the Consolidation of an Assessment-as-learning Culture and its author is Edgar Picón-Jácome. In this text, there is a case-study report on the implementation of an assessment alternative called assessment portfolio. The author shows a discussion of aspects such as the mediation of ICT in solving practicality issues on the part of the participating teachers when providing feedback on both the process and the product.

The manuscript that comes next and whose title is Pair Research Tasks: Promoting Educational Research with Pre-Service Teachers was written by Eulices Córdoba Zúñiga, Isabel Cristina Zuleta Vásquez, and Uriel Moreno Moreno. The authors show as their main interest in their writing the development of theoretical-practical pair-work research tasks of preservice English language teachers. A group of twenty preservice teachers took part in an exploratory study. Those participants are reported as having learned different things that led them to draft a research proposal.

The article that follows is titled Bombast Bombardment and Dense Syntax versus Effective Communication and Language Teaching in ESL Settings: Nigerian English Examples authored by Omowumi Olabode Steven Ekundayo. This manuscript reports on the sociolinguistic, historical, and idiosyncratic factors that influence some educated Nigerian English speakers’ linguistic habit of using use high-sounding expressions and complex syntactic structures. The article also explains the implications of such habit for teaching and learning English in English as a second language (ESL) settings.

The last manuscript of this CALJ issue is titled Decolonizing English Language Teaching in Colombia: Epistemological Perspectives and Discursive Alternatives by Yamith Jose Fandiño-Parra. In this text, there is a call that the author makes to decolonize ELT in Colombia. That call is motivated by a review of studies on colonialism and decoloniality. The article also shows a discussion of the tension between the global north and the global south as related to ELT and a proposal for resisting epistemic and cultural dominance through alternative local discourses.

To conclude, both the CALJ and the MA in Applied Linguistics to ELT are committed to the creation of opportunities for English language teachers and researchers to grow as both actors and authors of their own pedagogical and research experiences. The creation of those opportunities will continue to be informed by a sensibility and a sensitivity towards social, cultural, and political issues of ELT. This is what, in the end, is what the critical dimension of language education is all about.